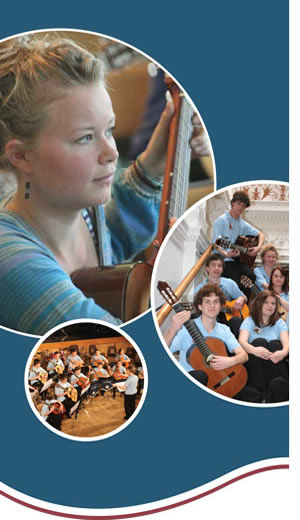 The Corinium Players Guitar Ensemble is a registered charity run by an executive committee governed by a constitution.

The Charity's objectives are:

a) to advance the education of classical guitarists of all ages

The Ensemble today comprises a junior, intermediate and senior section who also combine into a unique Guitar Orchestra.

The junior group are mostly of Primary School age. Playing together is a new musical experience for them and does much to build their confidence both as group and solo players.

The intermediate group, who in addition to developing their musical skills, are gaining experience by performing as an ensemble in concerts and festivals.

All three groups combine into a unique Guitar Orchestra, the only one of its kind in Gloucestershire.

The players have also an adult group, who meet once a month, which is proving very popular with guitarists of all standards coming from all over the county.

Being part of the Corinium Players Guitar Ensemble exposes the players to many opportunities. Members have played for the National Youth Guitar Ensemble and some members have gone on to study at the Royal Northern College of Music and Trinity College London.

On Wednesday 16th March 2016 Ruth, Ellen, Peter and Simon from the Corinium Players Guitar Ensemble had the privilege of performing at a private champagne reception for HRH Prince Edward as part of the Duke of Edinburgh Diamond Anniversary Celebrations.

The reception took place at the Bath Priory Hotel and the quartet played for an hour to approximately 18 guests. Before going into dinner HRH Prince Edward stayed and chatted about their interest in the Classical Guitar and the history of the group.

You can contribute everytime you purchase anything through major retailing websites at no extra cost.